There’s a new contender in the search for the Best Bagel in NYC.

One of the latest and greatest bagel and cream cheese experiences we’ve had in quite some time took place at Bagel Works, located on 1st Ave between 66th and 67th Streets on the Upper East Side.

In the weeks prior, we’d had a string of mediocre to poor bagel experiences as we traveled around the city trying various bagel shops.

We needed something to break us out of the spiritual and existential funk that settles upon one as winter approaches – or if it’s been a while since eating a great bagel. Thus, we decided to take advantage of a surprisingly pleasant Saturday morning with a jaunt to Central Park. As far as we knew, this could be the park-hang-worthy afternoon of the year.

Bagel Works popped onto our radar after it was independently recommended by two of our most trusted bagel correspondents. One of the central reasons for picnicking in Central Park was because Bagel Works would conveniently located on the way from Greenpoint.

We hopped on our electric bagel (the OneWheel) and embarked on a journey. We couldn’t have known it at the time, but it would change things forever.

When we arrived, there was a line out the door. This was obviously great sign.

The shop itself was a hole in the wall, which was another great sign. The elite New York bagel shops also tend to be the ones that are the most unassuming.

Despite the long line, it moved quickly. They were clearly running a very efficient operation, another hallmark sign of a great shop.

the litmus test was unreal

We ordered the “Litmus Test”, an everything bagel with scallion cream cheese not toasted, which is the order we judge every shop by. Right off the bat I knew this was going to be a good one.

The bagel was piping hot, fresh as can be out the oven. It had rich, double-sided everything toppings – I could hardly tell the top from the bottom. The bagel felt heavy in my hand, with good weight and girth.

The bagel-to-cream-cheese ratio was solid. The bagel was so blisteringly fresh that the cream cheese became an absolute sloppy mess that dripped all over my hands.

Then we took a bite…

MY GOD. It was so fresh and crunchy you’d swear it was toasted, and the heat of the fresh bagel basically turned the cream cheese into soup!

From the gritty shop, to the efficient operations, and of course the bagel itself- this was an absolutely top-notch New York Bagel experience. It was the most satisfying bagel and cream cheese we’d had in many months, and re-invigorated the fire and passion in our quest to find the best bagels in the city.

From there, we continued on to Central Park. A cherry on top of a perfect New York day! 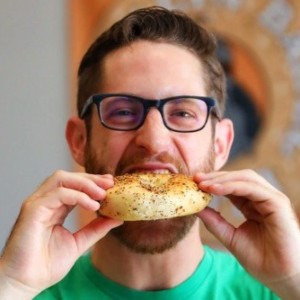 7 Ways to Eat A Bagel

The New Yorker examines “The State of the Bagel”

How Many Bagel Combinations Are There?